Andy Warhol was a genius. But the photographers he borrowed from to build his empire should have been fairly compensated for their work. That’s the message Mestaz Law’s Counsel Matthew Hersh* (out of his separate practice in Washington, D.C.) communicated this month in a briefing to the United States Supreme Court.

This fall the Supreme Court will hear a case that brings together two of the biggest names in culture—and a question of law that has roiled the world of copyright for decades.

The origins of the case go back to 1981. In that year, celebrity photographer Lynn Goldsmith met with an up-and-coming musician in the dressing room of a New York City nightclub. That musician was Prince. The album he had just issued was called “Controversy.” And one of the photos she took of him that day would lead to over forty years of controversy itself.

By 1984, Purple Rain was out, and Prince’s star was on the rise. Vanity Fair wanted to do an article on him. And they wanted Andy Warhol to do the art. But not just any art. They wanted him to start with one of Goldsmith’s photos. So they bought from her what is called an “artist reference” license, allowing Warhol to create artwork based on the photo.

So far, so good. Goldsmith got paid for the use of her photo. Warhol did his traditional work, silk-screening the photo purple and adding other flourishes. (He got paid too, of course.) The Vanity Fair edition was widely circulated. And Prince, needless to say, went on to become one of the biggest musical stars the world has ever seen.

“To the High Court”

But that was not the end of the story. Unbeknownst to Goldsmith, Warhol didn’t just make the one silkscreen, but fifteen others as well. After Warhol’s death in 1987, his foundation sold twelve of them to museums and collectors.

It all came to light when Prince died in 2016. Vanity Fair’s parent company, Condé Nast, planned a special tribute publication. They turned to the Warhol Foundation for a piece of art. And the Foundation licensed back to Condé Nast one of the fifteen other prints he had made of the Goldsmith photo. This time the Foundation got paid. Goldsmith did not. See the problem?

Goldsmith certainly saw the problem. She sued for infringement. But the trial court found in the Warhol Foundation’s favor under the “fair use” doctrine. Andy Warhol changed the “message and meaning” of her work with his silkscreen, the court reasoned, so that allowed him to use the work for free. An appellate court reversed—and now the Supreme Court will decide.

“Friend of the Court”

Enter Jeff Sedlik—a professional photographer who has taken some of the world’s best-known portrait photographs of blues and jazz legends. Sedlik, it turns out, has quite a story of his own to tell. And he asked Matt Hersh*, a licensed Supreme Court lawyer, to help him tell it.

Sedlik’s story also goes back a few decades. In 1989, Sedlik took a famous photograph of Miles Davis. He had suggested a low-key, moody tone. But Davis’s representatives gave him a session at noon on a beach—a photographer’s nightmare. Still, he made the most of it. To control the lighting, he designed a 400 square foot studio in his lot and transported it, piece by piece, to the location. The result—which you will see below—was a masterpiece.

Sedlik received rave reviews for his work. But some of the flattery came in the form of imitation. One particularly egregious case stood out. A tattoo artist who goes by the nickname “Kat Von D” traced an exact replica of his photograph onto a customer’s arm—and then promoted her work to her 20 million fans on social media. Below are the two images—Sedlik’s and the tattooist’s: 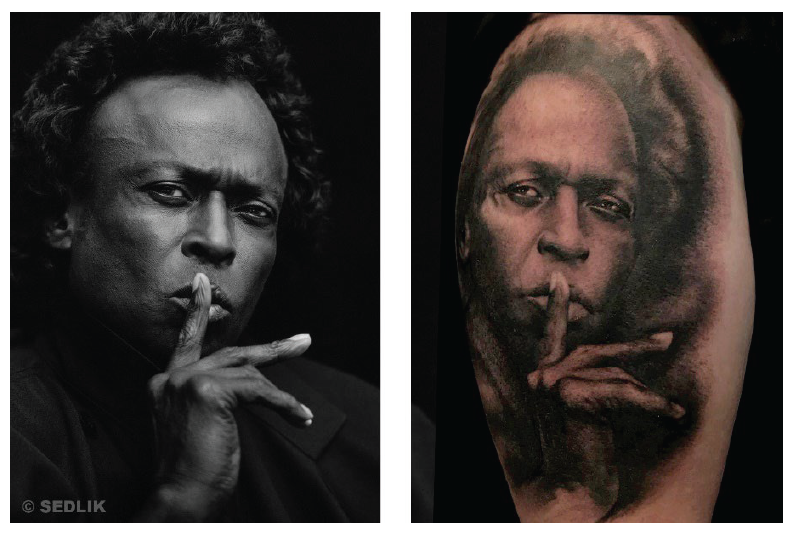 It should have been an easy case. How could this be fair? But a California court ruled that it might be—and punted it a jury to figure it out. Juries aren’t particularly friendly to copyright owners. Which means the outcome of the Supreme Court case will probably determine Sedlik’s fate as well.

So Sedlik asked Matt Hersh* to write—out of his DC practice—what is known as an amicus curiae brief. That’s a brief to the Supreme Court that someone with a significant interest in a pending case can submit. Matt told Jeff’s story above, and urged the Court to do the right thing. “Sedlik is prepared to assume the risks of litigation in his own case,” Matt wrote. “But many photographers cannot. Sedlik proudly contributes this brief on their behalf.” You can read the rest of Matt’s brief here.

“What Can Mestaz Law Do for You?”

Mestaz Law is proud to have Matt* on our Arizona team. Our state, was we explained in our last copyright blog, is filled with musicians, painters, software developers, documentarians—to say nothing of photographers. (Ansel Adams loved Arizona, and even founded a center for photography in Tucson.) Call and ask what we can do for you.

Why You Need Your Own Attorney in a Business Divorce

How an Assignment of Contract Works (and When It Won’t)

I Won a Big Judgment: Now What?